Low survival rate. Brain metastases in breast cancer occur with unfavorable forms of breast cancer: the choice of treatment method depends on the timeliness of diagnosis and the severity of metastasis.

In 13-16% of patients. Brain metastases in breast cancer are relatively rare and late complications of the disease (although the statistics of pathologists are slightly higher – up to 30%, which suggests that during life the detectability of intracerebral foci is worse than we would like). It is extremely rare (1% of all patients with breast cancer) everything happens synchronously – with the detection of a primary tumor in the chest, metastatic foci in the head are found.

The most unpleasant thing is that in half of the cancer patients, intracranial metastatic problems develop against the background of stable and long-term remission of the underlying disease. And it’s quite sad that in most cases these women are treated for various encephalopathies and cerebrovascular accidents, but not for oncology.

Most often with hormone-insensitive types of breast cancer. Brain metastases in breast cancer occur against the background of the following risk factors:

Already existing distant metastases in 2 or more organs (for example, in the liver and lungs);

Normally, the brain has an effective defense (blood-brain barrier), but this barrier cannot withstand highly aggressive forms of cancer cells that have an increased ability to penetrate the vascular walls of cerebral arteries.

Not immediately after the detection of the primary tumor. Behind the operation, radiation, and chemotherapy. According to the analyzes and clinically stable remission: it would seem that everything is over. It is at this time that one must be careful and alert, noticing and responding to the following signs:

Yes, it can be a stroke-type cerebral circulation disorder or encephalopathy, but if in the near past there was treatment for breast carcinoma, then first of all one should think about the fact that it could be brain metastases in breast cancer.

If there is any suspicion, a computed tomography (CT) scan with contrast should be done. Having found lesions in the head, it is necessary to begin a comprehensive treatment. The surgical operation is performed with a single focus and the technical possibility of removing the metastasis. The basis of treatment is standard irradiation or, if indicated, stereotaxic radiosurgery (targeted burning of the focus with radiation). Systemic chemotherapy courses complement radiation therapy.

It must be understood that metastases in the brain in breast cancer sharply worsen the prognosis for life: from the moment of detection of intracerebral tumor foci to the violation of vital cerebral functions, it can take only a few months without treatment. Against the background of complex therapy, even with three times negative breast cancer, you can increase the patient’s life expectancy for up to one and a half years. 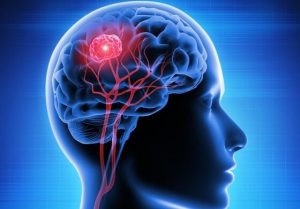 Previous ArticleWhat is adenosis of the mammary glands?
Next ArticleHow to Staging Breast Cancer? Useful information for women